TEXRail is a 27.2 mile commuter rail system that will operate between downtown Fort Worth, Texas in Tarrant County and DFW International Airport. Contract for the project was awarded to joint-venture Archer Western – Herzog for $998 million USD. Davis Motor Crane Service of Irving, Texas was selected as the contractor for bridge beam placement.

“We needed a solution for a 250-ton class crane that could walk with a load. Multiple rail closures and tight setups also meant that we could not use a crane that needed the time and space to set outriggers. The final requirement was a crane that gave us the necessary headroom clearance under existing overpasses,” said Wes Dowd, Operations Superintendent for Davis Crane Service.

“Adding the TCC-1100 was an eye-opener to the telecrawler market for us. We quickly saw the advantages. So when the TCC-2500 came available we did our homework and checked and double checked our measurements and added it to our fleet.  We feel that both of these cranes really give us the advantage to deliver on the unique hoisting needs of our customers,” said Dowd. 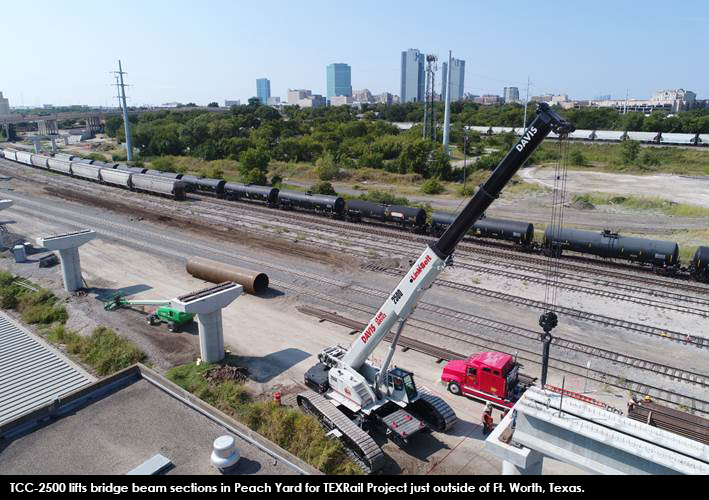 “We started out with trucks coming in here close to the rail with the TCC-1100 and TCC-2500 tying into the beams. Because of the small road we had to coordinate how to get the cranes in here, position with the trucks, and then set the beams,” said Davis Cranes TCC-2500 Operator, Lucas Williams.

“The TCC-2500 is easy to operate; multiple list charts come in handy where we may be flat one minute and then 1, 2 or 3 degrees off the next move around these pier caps,” said Williams. 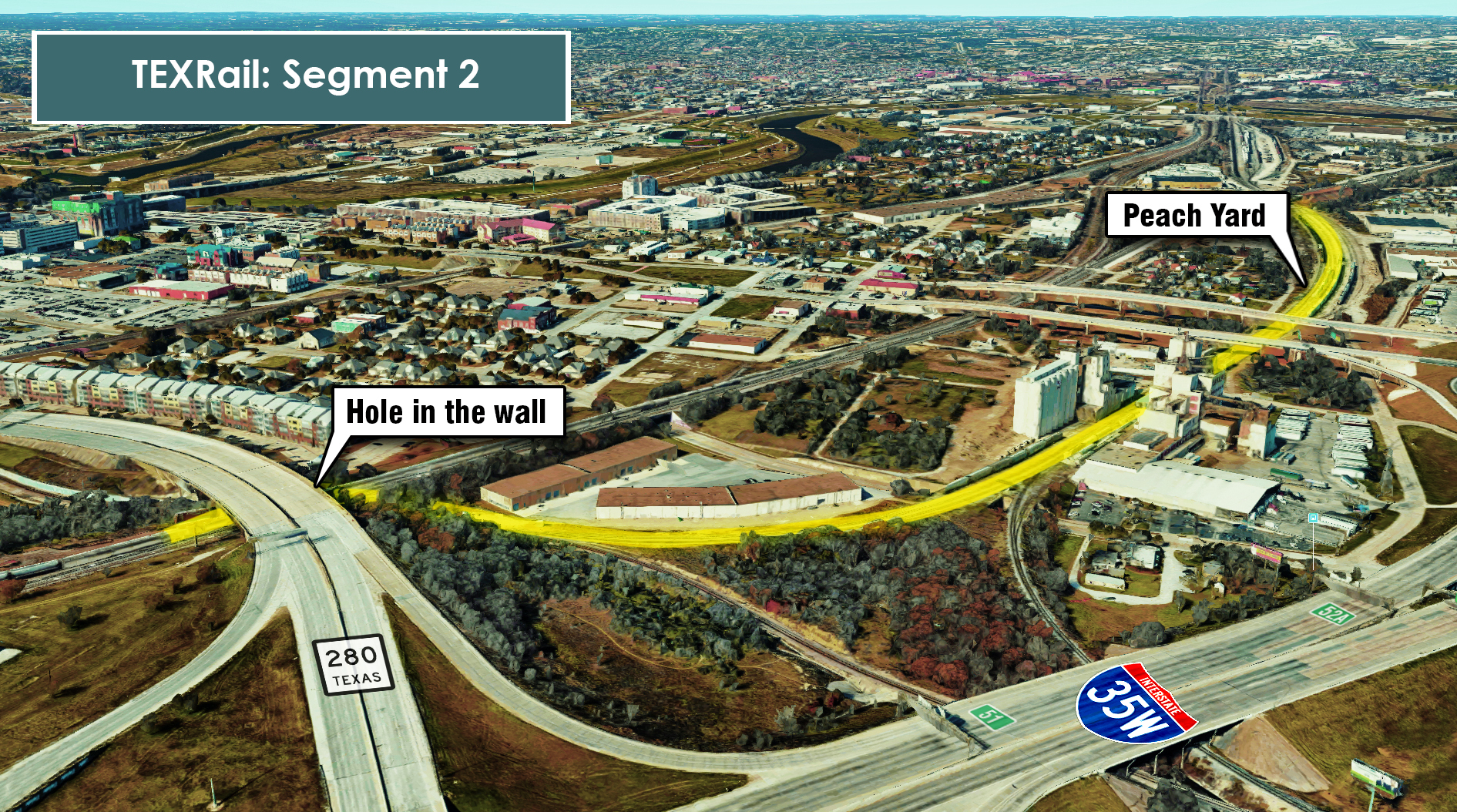 Segment 2
The 27.2 mile project has been broken down into three sections with Segment 2 considered the most tedious and difficult and also the shortest (less than four miles in length). Segment 2 begins at the existing Texas & Pacific Station and winds through downtown stopping at the ITC Station. From there it passes through a highly technical spot called the “hole in the wall” where four Union Pacific and Burlington Southern Santa Fe rail lines and eight lanes of TX 280 all intersect. After that it travels north up to Peach Yard before crossing Choctaw Bridge and east over the Trinity River.

“Taking into account the existing right of way from the other rail companies, crossing multiple bridges – both over and under, and adding to that maneuvering around existing utilities to form foundations for the piers in spots where the rail is elevated – this stretch north of downtown has kept us busy,” said Coke. 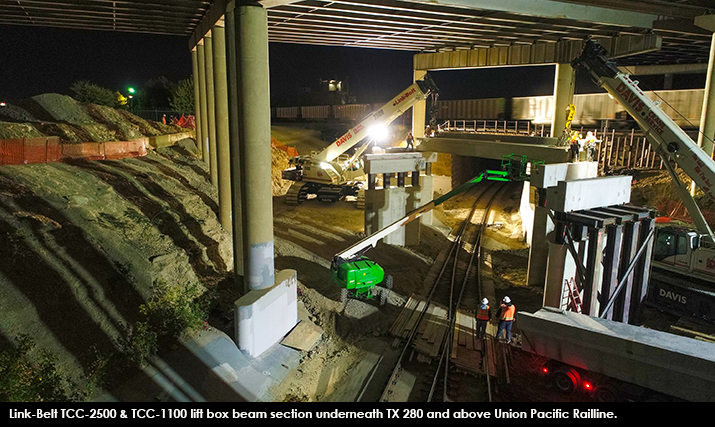 “They backed the beams down the hill as far as they could over the tracks and then I scoped out with the TCC-2500 and the TCC-1100 grabbed hold on his side as we lifted up,” said Williams.

Williams and Davis Crane Service had a very tight margin of room to work from with the overhead bridge at 48 ft. (14.6 m) above grade and the newly built pier caps at 22 ft. (6.7 m).

“We worked together to lift up, suck in, boom up and track back so that we could clear the caps to get the booms set because we had probably 5 or 6 foot of head clearance on top by the time we got the beams on top of the caps. The beams had to be set in about two and a half hours so the contractor could come in and pull the boards off the rails,” said Williams.

According to Williams one of the most difficult parts of the “hole in the wall” job was actually traveling down the makeshift road to get down into the hole.

“It was a really tight fit, and I didn’t have a whole lot of room to maneuver back and forth on my end. That’s why we put the bigger crane on my side so that I could reach across the tracks and grab the beams. The TCC-1100 had a little bit more room to walk back and forth if he had to. Pretty much once I got down in there I could only travel about 10 feet forward and backward,” said Williams.